It is generally accepted that a two-ribbon flare (TRF) is due to a reconnection process which happens in previously open magnetic field.
On the other hand, it is also known that there is no direct link between filament eruption and TRF. Moreover, about 30\% of TRF are not associated with active region filaments and their sudden eruption.
Any flare model must explain not only how and where magnetic energy is released, but also a location, shape and a topological link between all flare ribbons and remote brightenings seen in the course of a TRF.

Here we use the BBSO high resolution observations of the longitudinal magnetic field and H_alpha, and YOHKOH images of AR NOAA 8375, as well as a numerical method for reconstruction of the linear force-free field and we show that the 2B/M8.4 two-ribbon flare on Nov 5, 1998 was a result of many reconnection processes between closed magnetic loops.

Figure 1 shows GOES soft X-ray flux as a function of time. There were two large-scale events of energy release. The first one happened about 19:35 UT.

Figure 2 shows H_alpha images of the TRF obtained at the center of the spectral line. This long duration event lasted for several hours. It was a large flare which extended over the whole active region. No filament was present in this AR prior to the flare onset. The H_alpha image (19:43:35 UT) shows three well developed flare ribbons also marked with letters A, B, C. The second flare started at about 22:18 UT. After the X-ray flux reached its maximum, the GOES light curve has broken its gradual decrease and has formed plateau. This might be also seen in H_alpha images (Figure 2). After the eastern ribbon A has faded, the south-east ribbon D became brighter.

Figure 3 is H_alpha images obtained at the red wing of the spectral line. The post-flare loop system (dark loops) connected flare ribbons B and C (which was located just in the umbra of the sunspot) and showed apparent growth. The off-band images reveal a strong downflow at the loop footpoints. The image at 20:56:35 UT is a contrast enhanced image. The flare ribbons appear brighter then it was observed.

Figure 4 shows locations of H_alpha flare ribbons (dashed area) and a contour map of the longitudinal magnetic field (solid - N polarity). Solid lines 1, 2, 3 denote calculated field-lines connecting the areas a and b with the flare ribbons A and B. Divides between a, b and c areas (the thick closed contours) are the intersection of separatrices with the photosphere and represent the photospheric boundaries of different magnetic fluxes. These boundaries are places where a drastic change in the field-line linkage occurs. Discontinuities in the field-line linkage at the boundary are at the origin of the formation of current sheets.

The figure shows, that H_alpha flare ribbons were located at the separatrices. This suggests, that reconnection between magnetic flux represented with line 1 and the flux shown with lines 2 and 3 will create new magnetic loops systems: the H$\alpha$ post-flare loop system and a giant X-ray post-flare arch connecting the area a and the flare ribbon A. 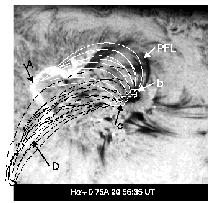 Figure 5 shows H_alpha + 0.75A image taken at 20:56:35 UT. Dark loops at upper right - growing post-flare loops system (PFL). Solid lines are calculated field-lines connecting the area b with the flare ribbon A. Dashed lines - calculated field lines which connect the area c with the flare ribbon D. The newly formed, after the first step of reconnection, post flare loops system and the giant X-ray post-flare arch exhibits apparent growth and thus, disturbs the pre-existing overlaying magnetic field. This might provoke the subsequent reconnection of the newly formed loops with the loops system which connects the area c and the flare ribbon D. This second-step reconnection should start a bit later than the main phase of the energy release and corresponds to the second energy release event see in Figure 1. 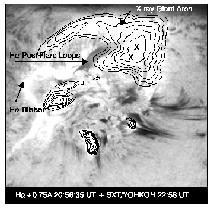 Figure 6 shows the off-band H_alpha image (the same as in Figure 3) with an overlapped SXT/YOHKOH image. One clearly sees the presence of both the low-lying H_alpha post-flare loop system (dark loops) and the overlaying hot X-ray giant coronal arch (a white loop with contours at the right top corner) according to the model prediction.

To estimate the lower limit of the energy released in the Nov 5, 1998 flare we made use of our extrapolated field and Melrose's quadrupolar current-loop model. The model gave us the flare energy of of E = 7.5 x 1029 erg which is one order lower then the observational estimates based on the YOHKOH/SXT irradiation.

Calculations presented here explore only the large-scale magnetic field structure in the AR. However, taking into account a possible filamentation of the solar magnetic field, this flare could be considered as a superposition of many small-scale reconnection events. In this case, one would expect a variety of angles between small-scale magnetic fluxes which would bring up the additional energy for the flare. The closed magnetic configuration, revealed here, naturally explains

We would like to emphasize that unlike the Kopp-Pneuman configuration, the model presented here does not necessarily need destabilization and eruption of the active region filament. The filament eruption, even if it accompanies a two-ribbon flare, could be a one of many equal possibilities to trigger a solar flare.